"I will pray for you" serves no other purpose than to convey
a totally self-serving, smug, and holier-than-thou attitude.

"It is far better to grasp the universe as it really is than to persist in delusion, however satisfying and reassuring."
~ Carl Sagan (1934-1996), American astronomer, astrophysicist, cosmologist, author

bill_sheehan at antitheism
“If you do not believe in God, how can you distinguish between right and wrong?”

Second only to some variation on “Nothing comes from nothing, therefore God created the universe” is the argument that without a perfect and eternal Authority, our laws and morality have no foundation. There would be no reason to prefer one moral claim over another, everything would be relative.

Strictly speaking, this isn’t an argument for the existence of God, it’s an argument that having a perfect moral arbiter is desirable. Neither argument stands.

If Christians believe in a God who is perfectly good, who is deeply concerned the moral choices made by his creation, who stands as the ultimate judge who will mete out eternal punishment and reward in the afterlife, shouldn’t we expect to find that Christians are better people, more peaceful, law-abiding, faithful, and chaste? Wouldn’t we be dealing with roving gangs of atheistic mother-rapers, father-stabbers, nuisance-creators and litterers?

Instead, we find our prisons full of Christians. (The fact that atheists are under-represented in prison populations is nice, but has more to do with education, social status, and age than lack of belief.) We find priests who molest children and preachers who hire male prostitutes and sanctimonious politicians cheating on their third wives.

Two days ago, the peaceful country of Norway was stunned by a horrific massacre of young people and a bombing in the center of government. The alleged mass-murderer in custody is not an atheist, he’s a conservative Christian who appears to have seen himself as a crusader.

Two possibilities occur to me: either Christians are wrong when they say that they derive their morality from obedience to their almighty God, or they’re wrong about the fervency of their belief in that God. Or perhaps both. 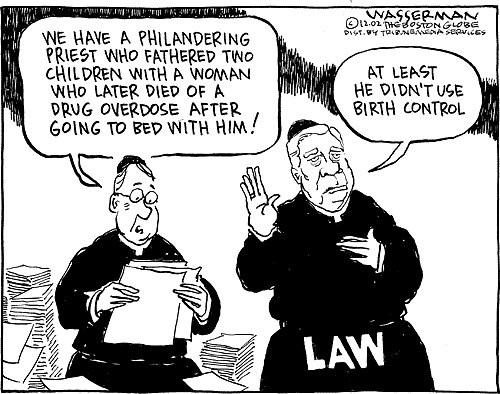 Did human beings really need God passing down commandments to know that murder is wrong? Didn’t we figure this out tens, even hundreds, of thousands of years before Moses? Picking up a club and bashing in Throg’s head would definitely be disruptive to tribal functioning, don’t you think? If Blarg steals my best loincloth, wouldn’t that cause arguments and strife in the camp, and possibly even someone picking up a club and bashing a head or two?

Empathy and reciprocity have been observed and studied in our closest ancestors, chimps and bonobos. Monkeys who share food are more likely to have food shared with with them. Monkeys who steal food from other monkeys are more likely to be driven off by the rest of the tribe. How many generations do you think it would take before we’d see a genetic predisposition in favor of sharing and against theft?

Most morality is simple empathy. I do not bash you over the head because I can imagine what that would feel like. I can picture the grieving of your spouse and your children. I would not hurt you because it hurts me.

But there’s one more thing. The Christian claims that his morality is founded upon a perfect and all-righteous Judge, yet he’s got the ultimate get-out-of-jail-free card. Christians believe that, no matter what terrible things they do in life, by the very fact that they believe that God’s son died for their sins, they will be saved. There is no crime for which they would not be forgiven, save the ultimate crime of unbelief. Their God, in fact, gives them license to get away with murder.

As an atheist, I believe that all life is unspeakably precious, because it’s only here for a brief moment, a flare against the dark, and then it’s gone forever. No afterlives, no second chances, no backsies. So there can be nothing crueler than the abuse, destruction or wanton taking of a life. It is a crime no less than burning the Mona Lisa, for there is always just one of each. - J. Michael Straczynski "You know what the motto for this country ought to be?
'You give us a color, we'll wipe it out.'" I can't help it that I was born here,
but we certainly didn't belong here to begin with,
and I have no pride in what my forebears did.

The Native Americans ("Indians" we called 'em until just recently) did the best they could to defend their homeland, but THEY ended up being called the "savages."

Damn us. They gave us an inch, and we weren't satisfied to take a mile, we took everything and put the original inhabitants on reservations.

Then we covered America The Beautiful in concrete and exhaust.

To varying degrees, this type of travesty is how every country on earth was founded.
You would think that in the 20th century humans would be more civilized.
But it goes on and on.
Damn humans. Push people around and then turn around and act proud of your country.

I'm not proud of any country.
I merely exist.

There's no valid argument against a ban on grooming children into believing fiction is factual, because the practice is totally contrary to our existing fraud and deception laws, the child abuse laws and the age of consent laws.

In an honest and intelligent society, we would ban teaching and preaching theist fiction as being actual fact, and ban defrauding children into believing a nonevidential supernatural world and a mythical God are real, despite having zero physical evidence in support of those claims.

"Saint" Francis Xavier (1506 - 1552) wrote: "Give me the children until they are seven and anyone may have them afterwards" — meaning - I will have them so indoctrinated by then, no matter what knowledge they may gain subsequently they will not get past (over) what I have taught them.

"God Is Dead"
How can something die if it never existed in the first place?

WE IS AMURRICA.
WE BLOWS UP THANGS.
:(